The Labyrinth at St. Gregory's 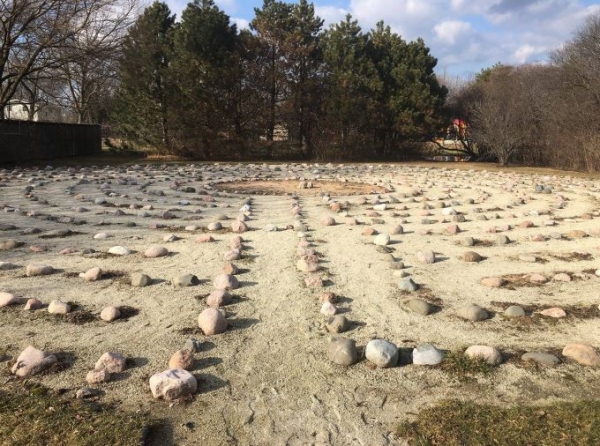 The labyrinth is for those on a spiritual journey, for anyone seeking healing of one sort or another, for people in transition, meaning, purpose, understanding, and peace.

The most ancient and universal labyrinths fall into the classical variety, which usually have seven paths but can have three, eleven, fifteen or more circuits, or paths.


The most famous labyrinth of historical times is the one laid in the floor of Chartres Cathedral just west of Paris, France. Built around 1220, countless pilgrims have walked this design as a spiritual meditation.

St Gregory's labyrinth is modeled after the Chartres design, having eleven concentric circles surrounding a rosette center. You too may rediscover a long forgotten mystical tradition

You are invited to walk our labyrinth. It is unicursal: there is a single path into and out of the center. Unlike a maze, a labyrinth presents no dead ends or false turns.

There is no wrong way to walk a labyrinth. You may intentionally choose an attitude. Make it serious, prayerful or playful. Play music or sing; pray aloud; walk alone or with others; notice the sky; listen to the sounds. Most of all be mindful of your experience.

Walking a labyrinth is a chance to take a "time out" from our busy lives, leading to discovery, peacefulness, and insight. One approach to the walk itself may consist of threefold path of

Labyrinths are an archetype, a divine imprint found in all religions traditions in various forms around the world. From ancient times, the labyrinth has been used to enhance the practice of walking-mediation and prayer.

Labyrinths have been known to the human race for over 4,000 years. Remains of the first known labyrinth have been found on the island of Crete. The earliest Christian labyrinth was most likely found in the 4th century basilica of Reparatus, Orleansville in Algeria. Labyrinth flourished throughout the 11th and 12th centuries in both France and Italy.

It is believed that during the Middle Ages, the cathedrals with labyrinths in Europe were designated as pilgrimage centers for those who wished to go to the Holy Land. Because of the great danger in traveling to Jerusalem at the time, as well as the cost people who desired ti make the sacrificial act of pilgrimage would walk in one of these cathedrals.

Most recent information asserts that labyrinths were used a s place to re-enact through dance and song Christ's Easter victories over death and hell. In the spring of 1999, a dedicated group of women parishioners replicated the Chartres' Labyrinth. St. Gregory's labyrinth is located at the north end of our parking lot and is open year round.